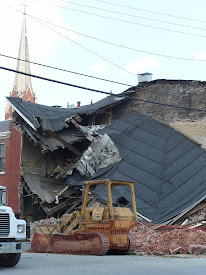 A building under renovation on Story Avenue in the Butchertown neighborhood collapsed on Wednesday afternoon, and the owner says a dispute with the city over preservation may have contributed to the incident.

No one was injured.

The collapse in the 1400 block of Story happened shortly after 4 p.m., according to a MetroSafe Communications dispatcher.

The structure on the corner of Story Avenue and Webster Street was split into two separate buildings with addresses of 1401 and 1403, each with three stories and with three apartments between the two, said Sgt. Sal Melendez, a spokesman for Louisville Fire & Rescue.

The front half of 1401 collapsed, but no one was inside. There were two apartments in 1401, one of which was occupied, though no one was home at the time.

The building is more than 140 years old, Melendez said.

Bobbie Rushing was the only one in the structure, at home in her apartment in the undamaged 1403 building. She ran out of her apartment when she felt shaking and found a cloud of dust and debris outside.

Richard Bruning said he was power washing a building across the street when he took a break and saw an outside wall of the building give way.

“Next thing you know the whole side of the building collapsed,” Bruning said, adding that a plume of dust rose higher than all the buildings on the block.

The owner of the collapsed building, J.R. Hennessey, said he was renovating it to serve as a storefront on the ground floor with apartments above. He has owned it since March 2008, and estimated the building had been vacant since the mid-1990s.

Hennessey said he had been in a dispute with the city Historic Landmarks and Preservation Districts Commission which he said may have contributed to the collapse.

Inspectors went to the building Sept. 9 or 10, when Hennessey said he called after finding cracks in a wall.

“Everybody there knew that this thing was in trouble,” Marchal said.

Initially Hennessey wanted to put in a temporary support on the outside of the wall while he formulated a permanent plan, but the inspectors advised him to get an engineer’s opinion.

Because the building lies inside the Butchertown Preservation District, Hennessey would need the approval of the Landmarks Commission for any changes to the outside of the building.

Several engineers Hennessey spoke to said they could provide advice, but a contractor would have to agree to carry out any plan. He said several contractors he spoke with advised him the safest thing to do would be to take down the entire wall and build it new.

But when he brought this recommendation to the Landmarks Commission, Hennessey said he was told to get another engineer’s opinion.

“They wanted it done their way or no way,” Hennessey said.

Hennessey said he didn’t think he had enough time to get any permits to make changes to the outside. He said he was consulting with other contractors and working to put shoring support to the inside of the wall when the building collapsed.

Marchal said he was told Hennessey couldn’t afford to rebuild the wall, which Hennessey denies.

Marchal said his office’s goal is to keep historic buildings standing and “we wouldn’t have stood in the way” over a solution that would do so.